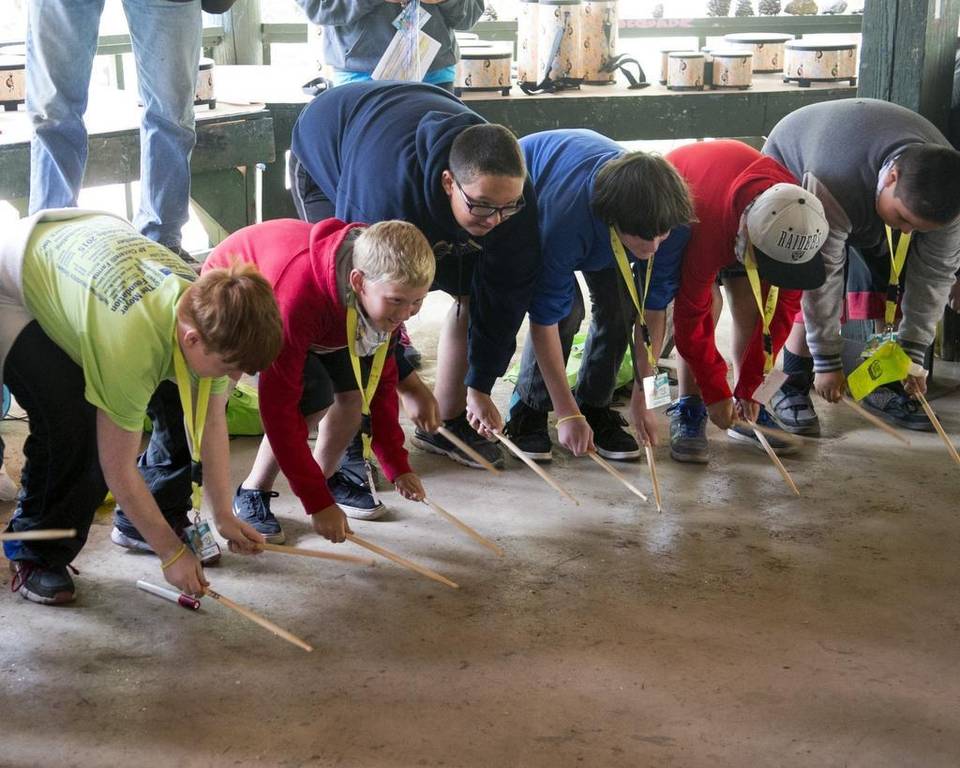 Written by Marijke Rowland in The Modesto Bee

Camp is camp, no matter what.

Camp Erin is a bereavement camp for children and teens who have lost someone close to them. So amid the hikes and games is time to share and grieve. Community Hospice has run Camp Erin at Camp Jack Hazard in the high Sierra for two summers now. The camp is part of the largest nationwide network of youth grief camps, founded by the nonprofit Moyer Foundation.

Since its first camp last summer, Community Hospice has expanded the program in length and size. This weekend, close to 80 campers, ages 6 to 17, attended the four-day retreat just outside Yosemite National Park. The camp is free to all campers and staffed largely by trained volunteers, as well as some Community Hospice and Camp Jack Hazard employees. While one might think this sort of program would be a somber affair, for the most part it looks and sounds just like a normal summer camp.

Counselors remind their charges not to run on the way to the pool. Instructors ask a loud room filled with excited chatter to listen. Kids sing songs about bears in the wilderness at the top of their lungs.

“The amazing part for us is to see the joy,” said Community Hospice Camp Director Nancy Houghton. “Yes, there is sadness and grief. But there is just so much joy.”

Campers are split into cabins based on gender and age. Then they’re treated to a schedule packed with rock climbing and archery, swimming and rope courses. Some activities help build trust, like walking a tightrope or navigating a rope web with the help of teammates. Others are designed to help improve coping mechanisms and normalize their grieving, such as a percussion workshop and journaling class.

All are meant to help the young people both get away from and better deal with a profound loss in their lives. For some it was parents or siblings; for others it was perhaps a friend or relative. The reasons are just as varied: cancer, car crashes, murder, drugs, suicide and more.

For almost all the campers, the experience is one of the first times they’ve felt surrounded by people who truly know what they’ve been through.

“Usually, people don’t understand you. People don’t understand and don’t know what to say to you. It can be an awkward situation,” said 15-year-old Modesto 10th-grader Kristina Yudin, whose older brother died in an automobile accident in Alaska two years ago. “So I was looking forward to meeting new people that are in a similar situation that I am. I don’t know anyone in the same situation.”

That bond can be seen almost instantly, said Susan Romero, a Somerset Middle School teacher who volunteered to help at the camp this summer. As a “cabin buddy” she underwent 40 hours of training to help the campers and offer bereavement help. But she said the children also become their own support system.

“These kids have completely, 100 percent restored my faith in humanity. They are so caring and loving with each other,” she said. “They’ve suffered such great losses, and you’d think something like this would destroy them. But they’re so resilient and full of love.”

One of the first activities, after all the cabins are settled into and introductions made, is a Memory Board ceremony. Each camper posts a picture of the loved one who has died and speaks about him or her. In the dining hall, a poster board is filled with photos – some faded, some new – of those lost. The ceremony is emotional for everyone involved, but also important.

Licensed marriage and family therapist Jeff Sabean, one of two grief counselors at Camp Erin this year, said the process helps the campers know they are not alone.

“Each person goes through their own grieving process, and as adults we’re just here to be present and be a person who can listen,” he said. “It’s been an emotional roller coaster. It’s hard to watch the pain some of these young kids are in. But it’s also very rewarding. It’s great to get these kids outside of their normal setting and experience things that require them to trust each other in different ways.”

This year, Community Hospice organizers added two new activities to the schedule: drumming and journal writing. Both are aimed at helping the campers express their emotions – one with sounds, the other with words.

Philadelphia-based professional percussionist Josh Robinson has been leading grief workshops for seven years. He started after playing his steel pan drum in the hospital while his grandfather was ill. After seeing the impact it had on his grandfather, the hospital staff and himself, he started to volunteer and realized he could help people through drumming. He has worked with Camp Erin across the country for the past few years.

His sessions are part Rhythm 101 and part therapy, teaching basic techniques and also using them as an outlet for self expression.

“When you have energy and emotions and feelings and don’t know where to put those, it can be really frustrating and confusing,” he said. “But music, in an instant, can be your voice. Even for quiet kids, you put a mallet and a drum in their hands and they are no longer quiet.”

The same can be said for writing. Former Modesto poet laureate and Modesto Junior College English instructor Sam Pierstorff led the journal writing class. He has the campers create their own slam poem, calling on experiences from their lives to talk about themselves.

Yet simply being in the wilderness, away from their families and the familiar, can be healing, Houghton said. Most of the campers, she said, have very little outdoors experience. Some had never seen the night stars so clearly before.

“It is an important tool to be connected to something larger than themselves,” Houghton said. “They forget that there is something bigger out there caring for them. So we connect them with nature and this beautiful place.”

Of course, bringing 77 kids, 40 camp counselors and assorted staff to the beautiful place takes planning, logistics and money. The service is offered completely without charge to area youth and volunteers. Community Hospice raises all the funds for the camp, about $65,000 to $75,000 annually, itself. The Moyer Foundation, which was created by professional baseball pitcher Jamie Moyer and his wife, offers the Modesto camp support and resources but no startup funding. The network has 46 camps across the country, including eight in California.

For its sophomore year, Modesto’s Camp Erin received a $17,500 grant from the Moyer Foundation, which allowed it to expand from the 50 kids it took its first year to almost 80 this year. Community Hospice has raised money for the camp largely through fundraisers such as its annual gala. It also relies on community and business donations. Local businesses have given water bottles, sunglasses, notebooks, teddy bears and more, which each camper received in a care pack.

Still the need, and interest, is great. This year, Community Hospice received some 130 applications, almost double its available spots. Most came from referrals from other agencies or simple word of mouth. In the future, the group hopes to expand or perhaps offer two summer sessions to help more children. For now, eligible youths from Stanislaus and San Joaquin counties are taken on a first-come, first-served basis starting in the spring.

Ceres 15-year-old Javey Gomez and his sister were among those selected this year. The 10th-grader, who lost his mother to cancer eight years ago, said he was excited when he first found out about the camp. While he is looking forward to the rock climbing and the archery, he said it also felt nice being with people who share a common bond.

“It’s good to know you can have someone’s back when they feel emotional,” he said. “This is a good camp, and if there are other kids going through similar situations, they should apply. It’ll be really good for them.”

Besides the Memory Board, Camp Erin includes a few other special rituals. Campers create a Remembrance Heart, a personalized pillow where they can tuck inside a secret message to their loved one. And on the final night, there is the big Heartlight Ceremony, where campers each create their own luminaries and then say a final goodbye to those they’ve lost, lit by their light.

But, like at almost every other camp, it’s the friendships most campers said they will remember the most from the experience.

“Definitely looking forward to all the new friends. I’m having such a good time, it’s like a little getaway,” Yudin said. “It’s really nice (that) people actually do this for us.”

See the original article on The Modesto Bee 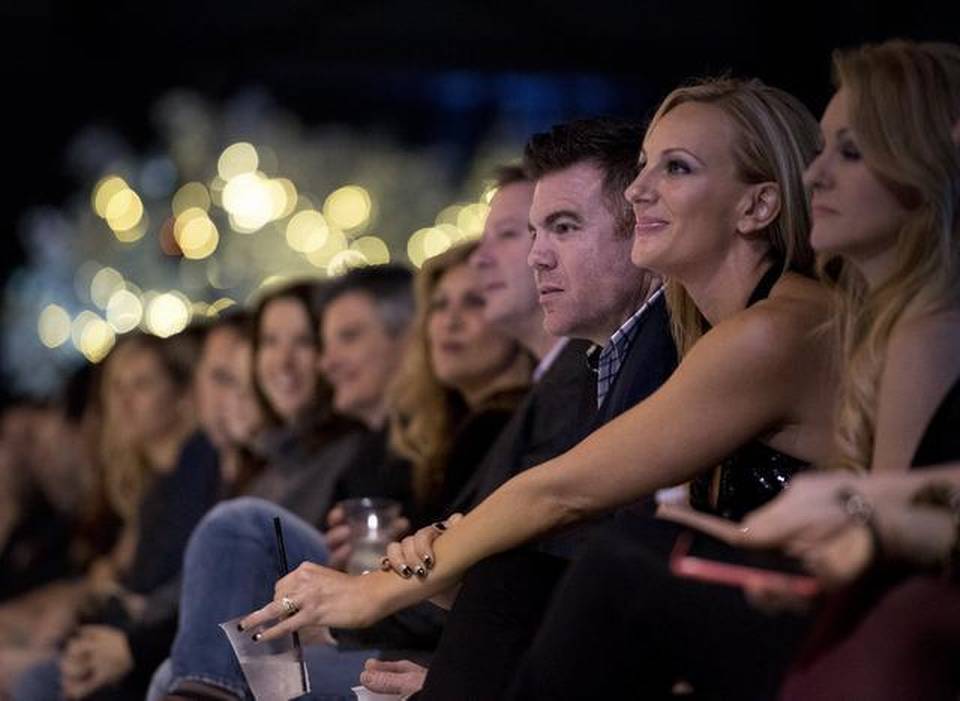 Unveiled 2015, a fashion show to raise money for Camp Erin of the Central Valley, was held Thursday night at DC Hangar 6 at the Modesto Airport. The sixth annual event, which has benefited several local charities, was presented by the Modesto Chamber of Commerce’s Leadership Modesto Class of 2015 in conjunction with one of its classmates, Mira Jantz, president of Mira Bridal Group Inc. The event was sponsored by Lexus.

This year’s beneficiary, Camp Erin of the Central Valley, is held in August at Camp Jack Hazard in Dardanelle. Created by the Moyer Foundation and supported by Community Hospice, Camp Erin is the largest network of free bereavement camps in the country designed for youth ages 6 to 17 who have experienced the death of someone close to them.

At the four-day camp, traditional camp activities are combined with grief education and emotional support. The environment provides an opportunity for grieving children to bond with peers who are in a similar circumstance.

The application deadline to apply for this August’s camp is May 15 but space is limited, so early application is encouraged. Application forms are available by calling Community Hospice at (209) 578-6300 or going online to www.hospiceheart.org/camp-erin. A plea was made at Unveiled 2015 for volunteers, also. To learn more about those opportunities, call Community Hospice, which is located at 4368 Spyres Way, Modesto.

Read the full article on The Modesto Bee